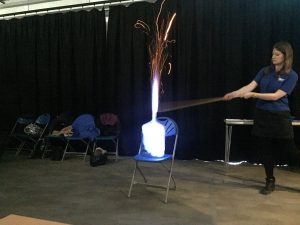 Last week we went to Jodrell Bank as part of our topic Space. We researched information about the planets in our solar system and other galaxies. The Lovell Telescope is used to search galaxies for other life forms. It is not a telescope that you look through because it uses radio waves. We took part in workshop about keeping healthy in space as well as trying out equipment the astronauts use on the space station.  Next we learnt how rockets are propelled in to space using fuel.  Our second workshop was about the Mars Rover mission. We worked in teams to make a Mars Rover landing craft. It had to protect its cargo when landing on Mars. To do this our cargo was an EGG. Several of the craft didn’t protect the egg enough and so there was plenty of yolk! However, one team was successful. Maybe these will be spacecraft engineers in the future.